ESP32 for IoT: A Complete Guide

When it comes to iot, the ESP32 is a chip that packs a powerful punch. The ESP32 is a follow-up to the ESP8266. This low-cost, low-power system on a chip (SoC) series was created by Espressif Systems.

Based on its value for money, small size and relatively low power consumption, it is well suited to a number of different IoT applications.

In this article, we’re going to break down the ESP32’s technical specifications and how it could be used for your IoT project.

ESP32 is the name of the chip that was developed by Espressif Systems. This provides Wi-Fi (and in some models) dual-mode Bluetooth connectivity to embedded devices. While ESP32 is technically just the chip, modules and development boards that contain this chip are often also referred to as “ESP32” by the manufacturer. The differences between these are explained further on in the article.

The ESP32 chip has a Tensilica Xtensa LX6 microprocessor in both dual-core and single-core variations, with a clock rate of over 240 MHz. There are now several different chip models available, including:

Models are available with combined Wi-Fi and Bluetooth connectivity, or just Wi-Fi connectivity.

The ESP32 is most commonly engineered for mobile devices, wearable tech, and IoT applications – such as Nabto. Moreover, with Mongoose OS introducing an ESP32 IoT Starter Kit, the ESP32 has gained a reputation as the ultimate chip or module for hobbyists and IoT developers.

While this reputation is not unmerited, the low-cost device can also be used in a number of different production systems, and its capabilities and resources have grown impressively over the past four years.

Here’s a high-level summary of the features and specifications of the ESP32:

And here’s a more detailed summary:

ESP32 has many applications when it comes to the Internet of Things (IoT). Here are just some of the IoT functions the chip is used for:

The ESP32 modules are commonly found in the following IoT devices:

Chip versus Modules versus Development Boards

The ESP32 is just the name of the chip. Device manufacturers and developers have three different choices in terms of which format they buy this in, and the decision of which one to go with will depend on their individual circumstances:

*Many international markets require shielded Wi-Fi devices, as Wi-Fi produces a lot of Radio Frequency Interference (RFI), and shielding minimizes this interference. This should, therefore, be a key consideration for all developers and embedded device manufacturers.

Manufacturers of ESP32 Modules and Boards

Espressif Systems are the manufacturer of the ESP32 chip. It is available in both 6 mm x 6 mm and 5 mm x 5 mm QFN packages. Here are the current models available:

The Espressif Systems esp32 is available in the following modules:

Other manufacturers of ESP32 modules include:

The AI-Thinker development boards include:

The Adafruit ESP32 development boards include:

The Wemos ESP32 development boards include:

The current Arducam ESP32 development board is:

What SDKs are Used for ESP32s?

There is now a wide range of software development kits (SDKs) available. These allow developers to program the chip directly without the use of a separate MCU.

Espressif provides one official SDK for use with either the ESP32, ESP32-2, or the ESP8266. This is the FreeRTOS-based SDK.

Aside from the Espressif options, there are plenty of commercial and open-source SDKs on the market, including:

Which is the best ESP32 Module or Development Board for IoT?

As the above comparisons show, there are a lot of options available with ESP32 IoT boards and modules. To help you with your decision making, we’ve summarized some of the most popular below. 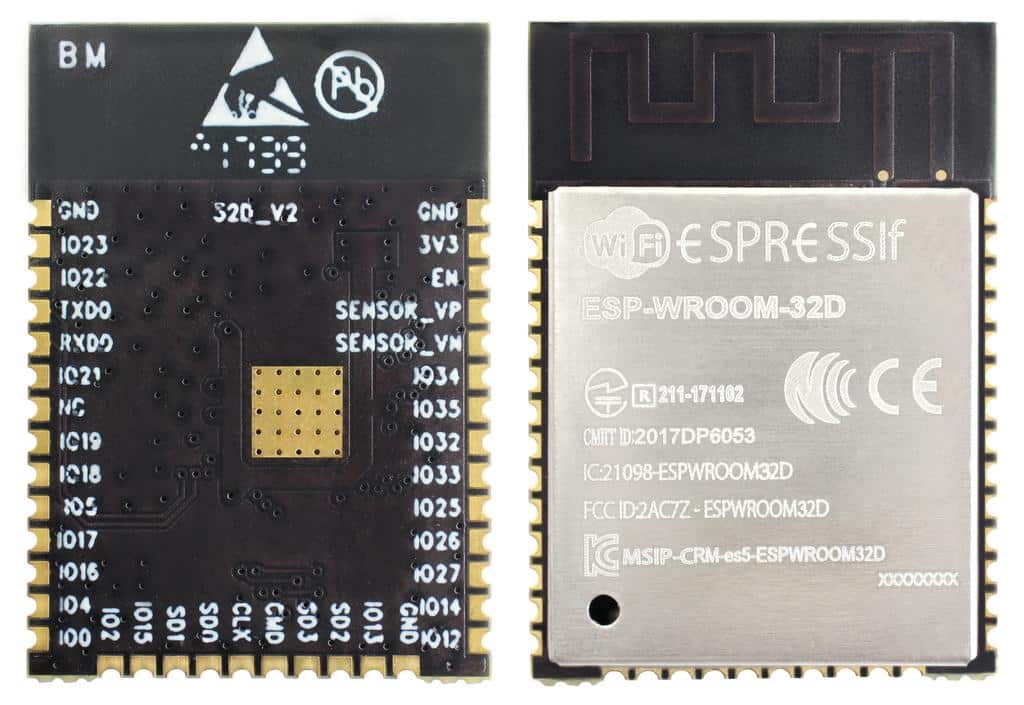 This extremely popular ESP32 module integrates with the ESP32-D0WD.

The main reason that the ESP32-WROOM-32D is such a popular module is its adaptability. It can target a variety of applications, including lower-powered sensor networks to voice encoding and music streaming. 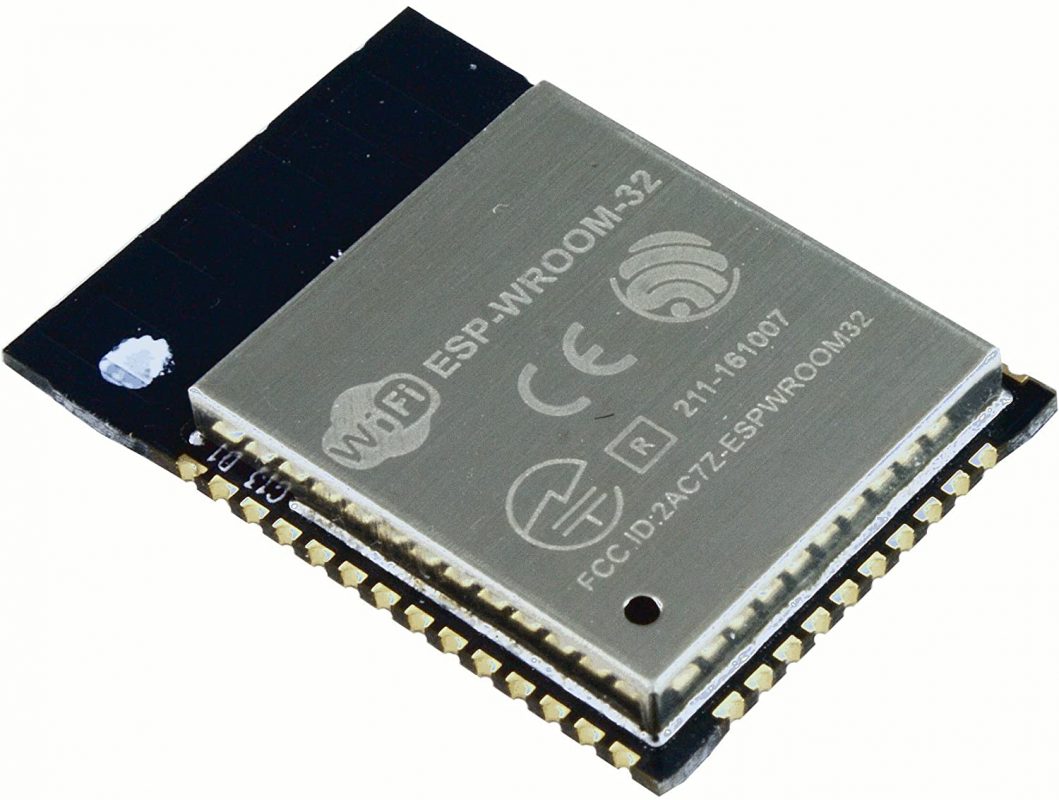 The ESP32-WROOM-32 is the original ESP32 module brought out by Espressif.

ESP32-WROOM-32 is a powerful, generic Wi-Fi+BT+BLE MCU module. At the core of this module is the ESP32-D0WDQ6 chip. The embedded chip is designed to be scalable and adaptive.

While there’s no denying the ESP32-WROOM-32 is a great module, it is not recommended for new designs. The ESP32-WROOVER module is provided in two versions: one with a PCB antenna, the other with an IPEX antenna. You can find the ordering information for both versions here.

Like the ESPWROOM32, the chip at the core of this module in the ESP32-D0WDQ6 chip.

This ESP32 module features two CPU cores that can be individually controlled. Moreover, the CPU clock frequency is adjustable from 80 MHz to 240 MHz. The user may also power off the CPU and use the low-power co-processor to continuously monitor for changes or crossing thresholds.

The ESP32 CAM is a little different from the other development boards on this list. This fully-developed microcontroller also has an integrated camera and micro SD card socket.

The ESP32-CAM is based upon the ESP32-S module, so it shares the same specifications. This includes UART, SPI, I2C and PWM interfaces, Wi-Fi image upload, clock speeds of up to 160 MHz, and 9 GPIO ports.

As there are many components on the bottom, it may be easier to avoid a solderless breadboard when experimenting with the ESP32-CAM. Furthermore, the use of jumpers with female Dupont connectors is recommended. 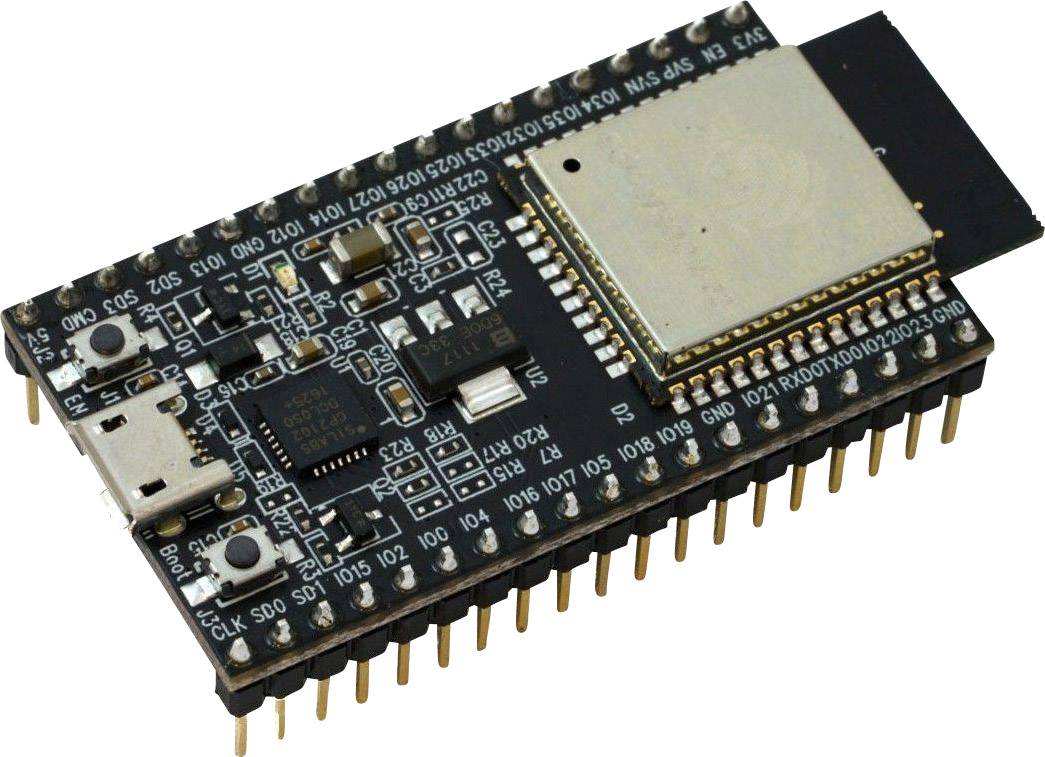 The ESP-DevKitC is a relatively small development board from Espressif. The I/O pins are broken out to the pin headers on both sides for easy interfacing.

Developers can connect peripherals with jumper wires or mount the ESP32-DevKitC V4 on a breadboard.

A key advantage of this development board is not just its small size, but also its low power usage. 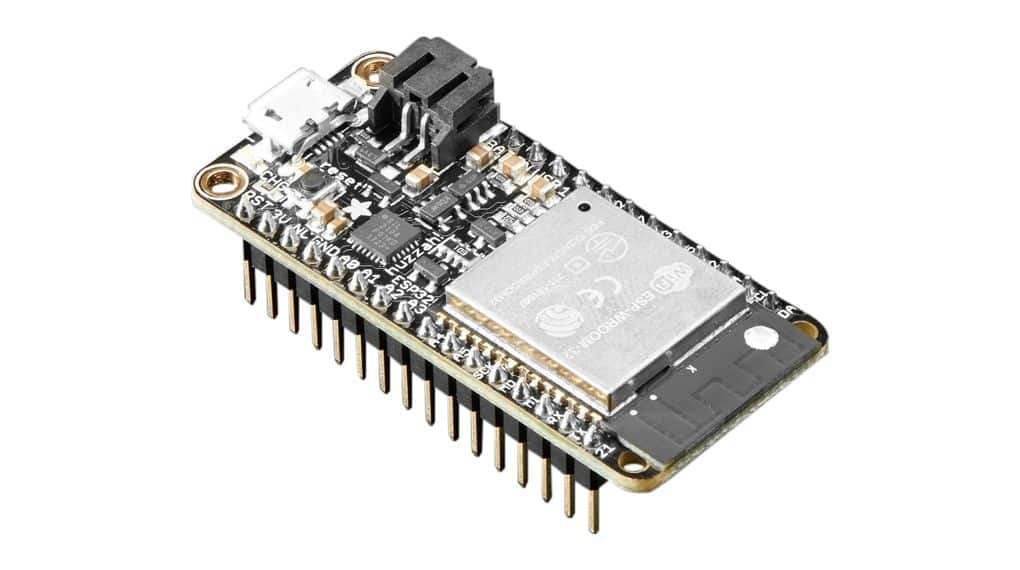 The HUZZAH32 is sometimes referred to by Adafruit as the ‘feather board.’

This development board is favored by beginners in IoT. It integrates the ESP32 with additional hardware, which makes it easier to program and use in projects.

TheNodeMCU development board features Wi-Fi+Bluetooth connectivity, onboard CP2102 and keys.

A key feature of this AI Thinker development board is that the I/O pins of the ESP-WROOM-32 module are accessible via the extension headers. Moreover, it is open-source and supports several different source codes.

We’ve published a range of other IoT resources for our community, including: