This blog post is the first of two that describe all the steps necessary to implement a paired public key authentication (PPKA) based Nabto solution. This first part introduces concepts, explains how access control works in Nabto and dives into the details of implementing the uNabto device side of access control. Device in this context means the embedded (IoT) system. Part two describes the client side of things with implementation details for a few different platforms.

PPKA is the recommended approach to access control as outlined in section 8.2 of TEN036 Security in Nabto Solutions.

Whether this is the right solution for you or not is discussed in section 8 of TEN036 Security in Nabto Solutions. If you don’t already have an existing central infrastructure for managing users (some kind of management portal) or an existing credentials database on the device, then this simple PPKA approach as described here is often ideal. The PPKA approach also supports more advanced use cases with centralized management of access control, this will not be covered in these posts.

Customization of the flow and rules is simple to do as the Nabto framework just provides the basic primitives to perform the pairing: The developer can get information about the user’s connection type and access a simple database of public keys (that is, fingerprints (checksums) of public keys) and the associated permissions.

The Nabto PPKA pairing flow is as follows:

After pairing, the user can access the device from remote. When connecting from remote, the Nabto servers (denoted the basestation services) first perform a normal challenge response handshake with the client (as regular TLS) and hence validates that the client possesses the private key that matches the public key (the authentication step). The fingerprint of this public key is then passed on to the device which finally looks it up in its access control list (the authorization step): Does this client have access and what are the permissions?

The fingerprint is sent from basestation to device on the encrypted channel between the two, established when the device initially registers. For details, on this latter step, see section 9.1 in TEN036 Security in Nabto Solutions. For details on the full handshake, see sections 11.1 and 11.2 in TEN036. Essentially, the expensive RSA calculations are offloaded from the resource constrained device to the basestation so the device only needs to do less expensive symmetric cryptographic operations.

Schematically, the pairing looks as follows (starting when the user triggers the pairing process (assuming the RSA keypair already exists): 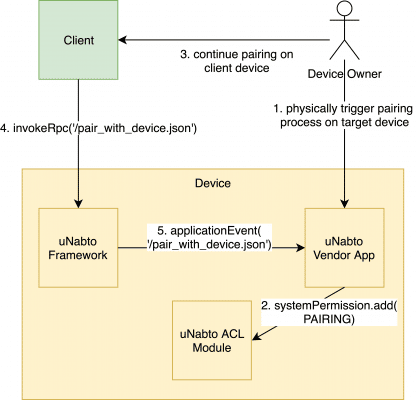 With a bit more detail, the pairing process looks as follows (“Vendor Backend” is the actual system to be remote controlled, e.g. a heating pump):

And the subsequent authorization using the ACL: 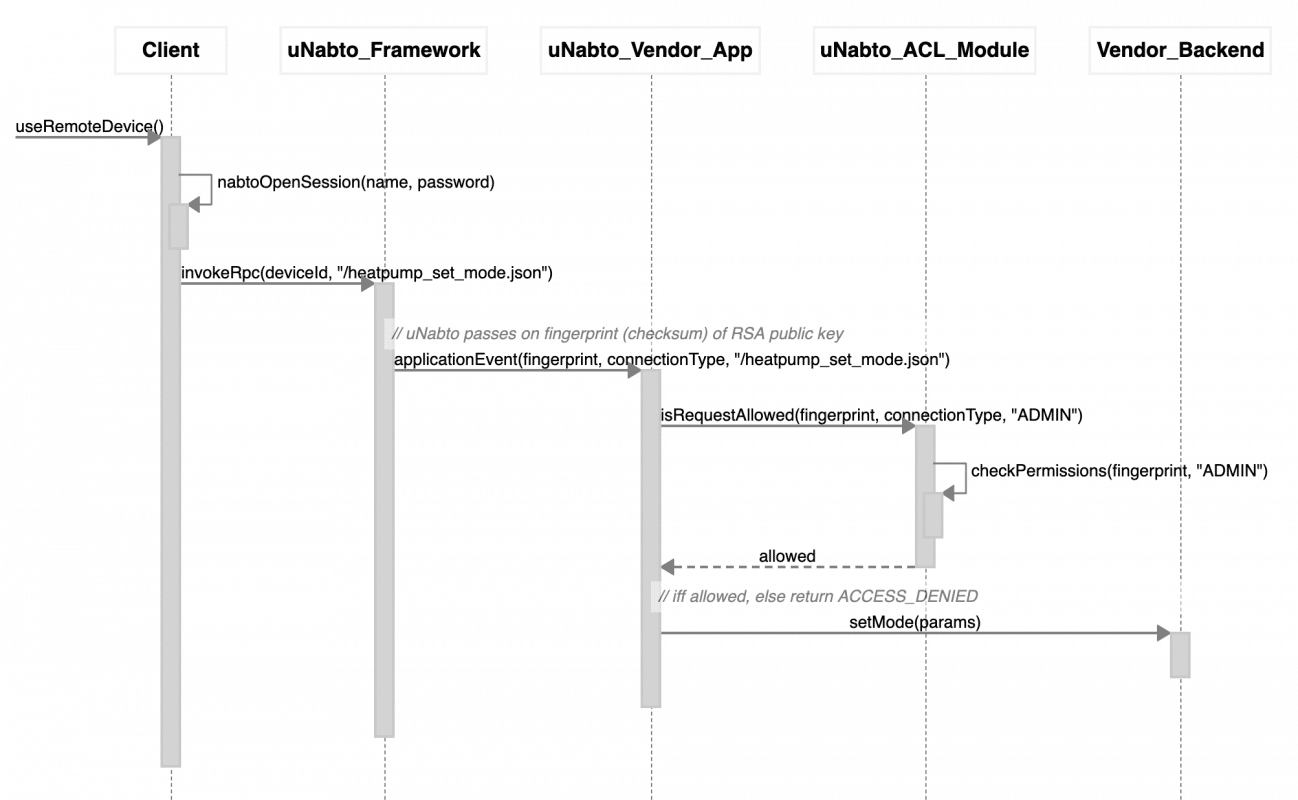 There are already several examples that support Nabto PPKA. The most comprehensive example is the Nabto heat control example as there are clients for several platforms and full support in the device. The Nabto Tunnel reverse proxy often used for video solutions also supports the full PPKA approach and implements all the necessary RPC functions – but none of the video client demo apps support pairing (so use the nabto-cli tool for a tunnel demo with pairing).

The corresponding client is available for Ionic here: https://github.com/nabto/ionic-starter-nabto

… and for iOS here: https://github.com/nabto/ios-starter-nabto

To use PPKA, you must perform the following tasks (details outlined in the remainder of these two posts):

A simple ACL database is provided as part of uNabto as a module, documented in the ACL module README. The module is only used from application code and can hence be replaced with anything more advanced you desire.

When using the uNabto ACL database, it must be initialized when starting uNabto. In the heatpump demo, this happens as follows:

A summary of what happens here (details are described in ACL module README):

default_settings.systemPermissions defines which operations are permitted on the system. So when starting the demo and nothing has yet been written to the database, pairing, local and remote access is allowed. In a production system, you may want to restrict this so remote access is not necessarily enabled until the user explicitly enables this (as the warning also hints). This is the “master switch”, more fine-grained access control ensures only intended users can access as outlined below.

default_settings.defaultUserPermissions defines the permissions granted generally to new users added to the database, ie used for guests (non-admins). This user type is per default restricted to local access only.

default_settings.firstUserPermissions defines the special permissions granted to the first user added to the database – we consider this the owner of the system with admin privileges.

Note: If you do centralized access control, ie the Nabto basestation performs all access control through webhooks and/or access tokens, then it is important to remove the FP_ACL_SYSTEM_PERMISSION_LOCAL_ACCESS permission bit. This will then prevent offline scenarios – but will allow the basestation and any associated 3rd party services to control all access to the device.

Per default the option NABTO_ENABLE_CONNECTION_ESTABLISHMENT_ACL_CHECK is not set (but most demo applications override this), set this to 1 in your application:

When this option is set, the uNabto framework invokes the allow_client_access callback function where your application can decide if the connection should be allowed to proceed or not. A typical implementation looks like:

Line 3 above allows the connection to proceed if either the user is paired (ie, the ACL database says so) or if the connection is local. This is just the first coarse-grained check, ie when the connection is established – later when actual functionality is to be used on the device, a more fine-grained permission check is done.

If using the default ACL database you can just use the default ACL RPC implementation. In that case, the uNabto device’s application_event handler may look as follows where we delegate handling of the ACL RPC opcodes (11000-12000) to the ACL module:

It is recommended to take a look at the ACL module’s implementation of this function, specifically how it checks if pairing mode is active, ie if the FP_ACL_SYSTEM_PERMISSION_PAIRING bit is set in the current systemPermissions. Also note how it adds the fingerprint from the current uNabto connection to the ACL database.

get_public_device_info.json: This function retrieves public information from the device, useful when listing devices in the user interface in the client after discovery. In this example, we use it to tell the client which icon to use for this device type and if the device is open for pairing. From the heat pump implementation you can see there is no ACL check due to the information being considered public:

set_device_info.json: This function updates device settings and hence should only be performed by the owner. This is done in line 3 below by looking up in the ACL database that the current user’s fingerprint is associated with OWNER privileges:

heatpump_get_full_state.json: This function accesses the heatpump state which should require a paired user to access, but not necessarily the owner. This is done in line 3 below by looking up in the ACL database that the current user’s fingerprint is associated with GUEST privileges, ie is just included in the ACL:

The connection level access control listed above in step 1.2 also applies for tunnels. To control if individual ACL users can open tunnels, start by making sure the unabto_config.h file includes the following:

This means the uNabto framework invokes the unabto_tunnel_allow_client_access callback in the application code before opening a tunnel:

The ACL module helper fp_acl_is_tunnel_allowed looks up the fingerprint of the current connection in the ACL – if it is paired, the client is allowed to open a tunnel.

Pairing users prior to this is identical to what was described in step 1.4 for RPC – ie, you can use the provided default ACL manipulation RPC functions for tunnel applications as well (as shown in the default tunnel app).

Continue with the second post to learn about how to do pairing from client apps.