IoT RTOS Comparison: Azure vs. AWS vs. IBM vs. Google

When it comes to choosing the right RTOS for your IoT solution, it can be hard to know where to start.

All RTOSs deliver deterministic, hard real-time responses to external events and, therefore, process a limited number of predetermined tasks much faster than a normal OS. This makes them perfect for running multiple IoT devices, among other applications.

That being said, what are the differences between some of the most widely used RTOS? In this article, we’re going to complete an IoT RTOS comparison of the systems provided by four tech giants:

Here at Nabto, as an IoT connectivity solution provider, we have plenty of experience dealing with devices running RTOS, so we speak from first-hand experience. Who will come out on top? AWS IoT vs. Azure IoT vs. Google IoT – let’s get into it.

The RTOS offering from Microsoft’s cloud service claims to be “embedded IoT device development made easy”. This is a big strength of Microsoft’s real-time operating system: ease of use. For this reason, it’s an extremely popular real-time operating system. It’s already deployed on over 6 billion devices worldwide and supports the most popular 32-bit microcontrollers.

The Azure RTOS source code on GitHub is free to use. Furthermore, users are free to set up IoT connectivity between the approved hardware devices – which you can discover by signing up to Github. However, if you want to use the Azure RTOS for an unapproved device, you need to contact sales to discover pricing options.

If you use Microsoft as your main OS or have an affinity for devices that support the Azure cloud, this might be a good option for you. However, if you’re looking to set up real-time tasks on unsupported devices, be prepared to spend some money.

What kind of devices can this open-source RTOS connect to? Below are some examples:

A big benefit of the AWS real-time operating system is it’s trusted kernel. World-leading companies see the FreeRTOS kernel as the benchmark for microcontrollers and small microprocessors. Moreover, it prides itself on its security libraries. These include secure cloud connection, certificate authentication, and a code signing feature. The Transport Layer Security (TLS v1.2) can protect your IoT connections without compromising on latency.

How does AWS’s FreeRTOS system work? Check this image below: 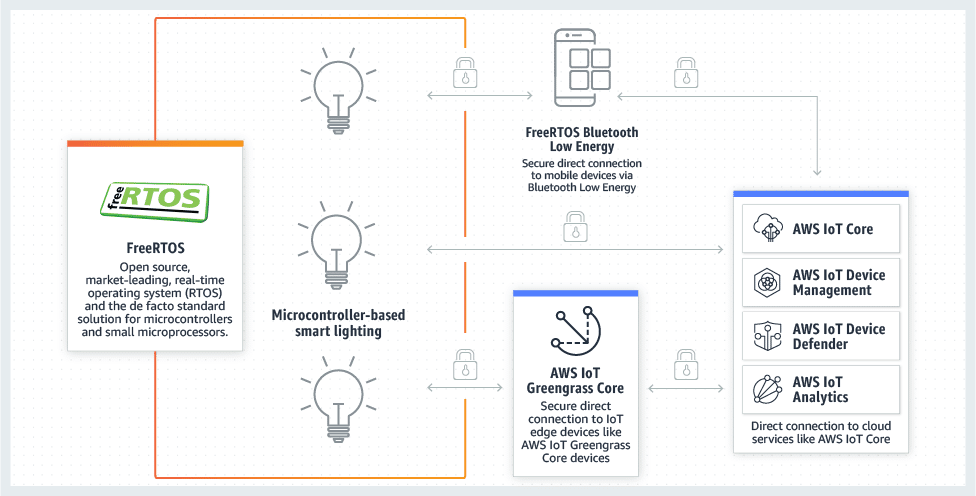 A big plus point of AWS’ RTOS is in the name: it’s free (kind of) as it’s available under the MIT open source license. Moreover, this license has limited restrictions on reuse. That being said, you may end up with additional charges with FreeRTOS if an IoT device connects to AWS IoT core. If so, you’ll be billed for use of that service. There are a few other areas where you may be charged – you can check them out and calculate what your RTOS spend might look like here.

If you’re looking to connect multiple Amazon devices with minimal latency and maximum security, FreeRTOS may be the right real-time operating system for you.

Google and IBM – Do They Have an RTOS?

Google has been quietly working away on a new OS since 2016. The release dates for the Google Fuchsia are currently hazy, but an announcement is expected later this year.

The big change between this and their existing OS – Chrome and Android – is they will be using a new type of kernel. Existing Google operating systems run on Linux, but this combined OS will run on Zircon (named after the mineral) This is rumored to be consistently upgradeable and extremely secure. It could be a big leap for Google.

Does this mean that Google will be implementing an accompanying RTOS with the Zircon kernel? Only time will tell. However, you can’t help but feel they want a piece of action currently monopolized by AWS and Microsoft.

The IBM Cloud – formerly known as IBM Blueprint – offers many different cloud programs to its users. However, at this moment in time, they do not offer their own RTOS. That being said, Azure and AWS IoT devices are able to connect to the IBM Cloud.

That covers the IoT RTOS comparison of these four tech monoliths. Google will undoubtedly be looking to compete against AWS and Microsoft in the next couple of years and an IBM RTOS is a likely possibility, too. However, there are some other RTOSs that can fill your IoT connectivity needs.

If you’re looking to carry out a real-time task with accuracy and speed, it’s worth looking around closely at what is available.

One thought on “IoT RTOS Comparison: Azure vs. AWS vs. IBM vs. Google”